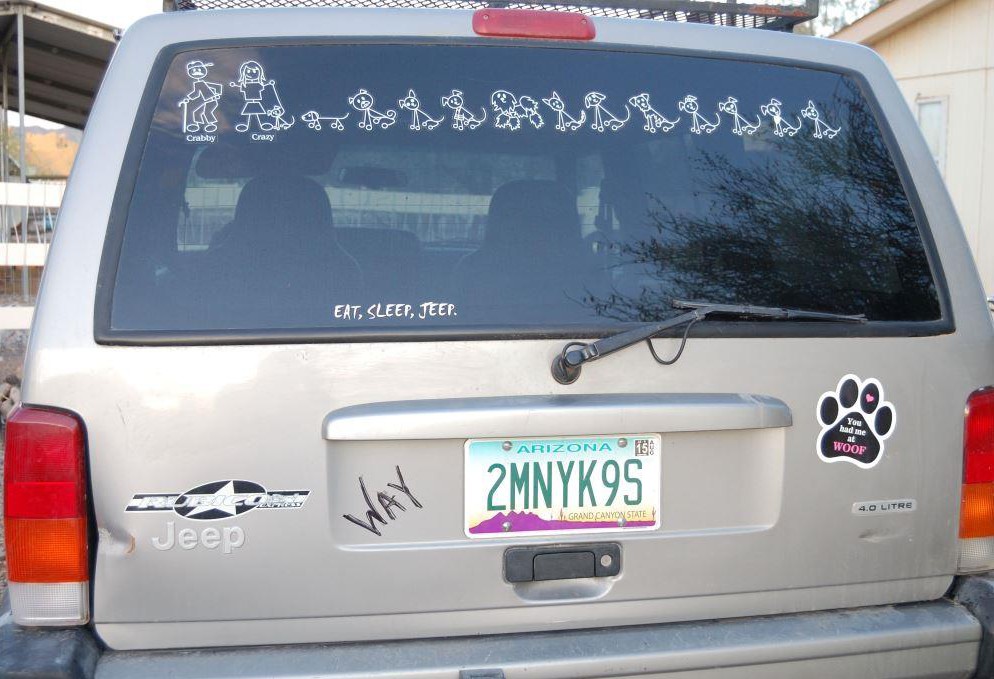 We’ve converted Hal and Charlie into free range horses.  Rather than turning them out in the arena, we just open their stall doors and let them wander where ever they want.  The back yard is fenced, why confine them to one section?

To further boost their ‘environmental enrichment’, and despite Hal’s issues with hay, from time to time we’re dropping a bale of bermuda hay (the less tasty kind) so the boys can get in touch with their herbivore roots.  They pick at it, but don’t dive in like they did when hay was their primary food source, and when they got alfalfa or timothy, the yummier kinds.

Bermuda hay is very loose and messy, unlike alfalfa or timothy which hold together.  As loose at it is, and as relatively gentle as the horses seem to be with it, I couldn’t understand why it keeps ending up in a pile resembling what the grower had just cut down.

Tonight I found the answer.  It’s not the hay that’s the problem, it’s what’s in it.    It appears we have some sort of burrowing creature inhabiting our hay bales. 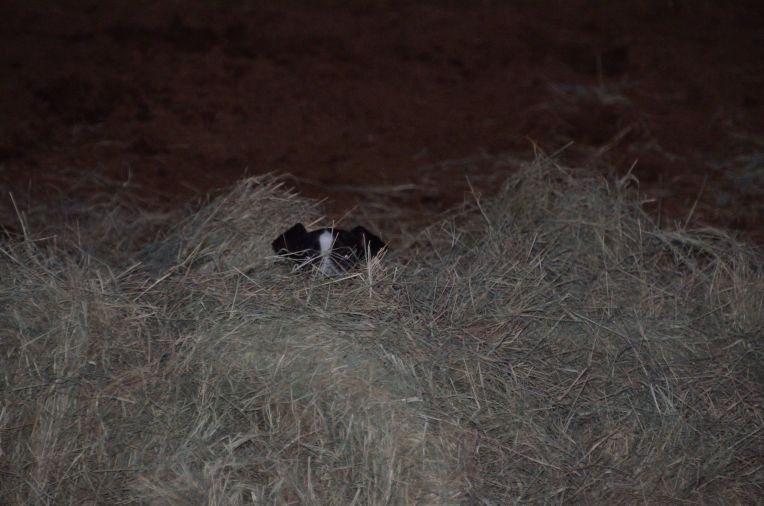 Recently, we instituted mandatory Something Special Days.   Once a week, each dog is to be separated from The Hoard for 100% attention.  No cell phone, no distractions, just 100% attention focused on one dog.

Today was Sarah’s Something Special Day.

As an added bonus, she had both Crabby and me there to share it with her.

Does this look like a happy girl to you?

Y’all know how Crabby and his Main Mutt Morty like to get out into the wilderness.   You should also know how happy Willy gets whenever Crabby and Morty leave.

I found the PERFECT gift for the 3 of them!

So, Willy; how do you feel about yet one more opportunity for Morty and your Dad to leave for day(s) at a time?

Crabby and Morty will be taking The Sea Woof to Lake Pleasant on Saturday for her maiden voyage.

I’ve posted many a pic, and a few posts, showing how the Run A Much Ranch dogs excel at making the most of small spaces.

Nimwits piled on top of each other, series of multiple spoons, and other such cute, cuddly, compact postures have been shared with pride, me believing our dogs were the masters.  I was wrong.

I humbly yield the Space Saving Masters Title to the Bull Terriers in this video, with extra accolades going to the black and white one.

So there we were, out for Sunday Family Desert Walk, at the waterhole, when suddenly and without warning, something emerged from the muck.

It ran to and fro for a while.

We tried to be silent and still so as not to be seen by the evil spawn from the depths, but it saw us anyway, charging at us in a most menacing manner.

Mortimer was flummoxed by the sight. Afraid to approach, yet equally afraid to flee.

Terrified though we were, we decided to stay near the waterhole for the safety of the other dogs who accompanied us.  Eventually the wild THING that emerged from the muck calmed down enough for us to realize it was just Emmi.

Words of wisdom from The Crazy Dog Lady:  Beware Wet Emmis wherever they may be found.

It wasn’t fair that Pablo didn’t get to out on Sunday Family Desert Walks.  Shy of fitting him with 50 pound weights, we weren’t sure how to slow him down in the wilderness, and if he got away from us, he would be gone for good.

We eventually relented, tightening his collar, putting him on a long line and clipping the line to my person.  The clip is a safeguard, insuring Pablo is safely attached to me in the event I become incapacitated for any reason.

Though Pablo does enjoy the walks, actually, they’re more like sled dog training sessions for the amount he pulls, sometimes he gets a little frustrated and, for lack of a better word, explodes.

I wish I had the video recorder for this morning’s episode, but all I had was the still camera.  It was enough to get the pre-explosion, however 🙂 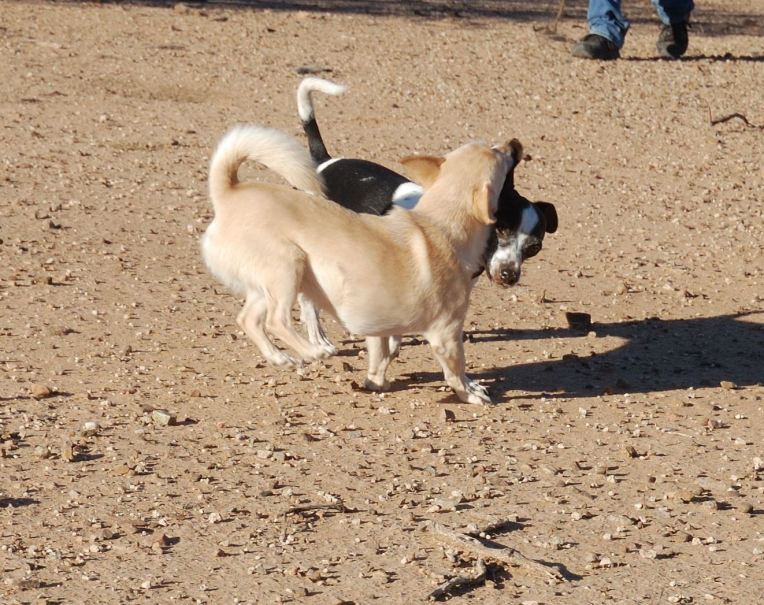 Clearly Vito takes the ticket on this one!

With Crabby sleeping on the floor more often due to his back (wouldn’t want him to get it checked out would we?), Willy has decided Crabby’s side of the people bed belongs to him now.  No more waiting for his turn in the rotation – Willy believes his rightful place is next to me, on the people bed, every night.  On those “Good Back” nights when Crabby does sleep in the people bed, Willy is horrified when forced to make other sleeping arrangements.

There’s a problem with this, however:  Willy has decided spooning is a requirement.   Not a bad thing if it’s a human who showers.  Not so pleasant when its a dog who doesn’t.  At bedtime, Willy squashes himself against me, and until I roll over into the proper spoon position, with my arm around him, he will snort, sneeze, shimmy, flop, look over his shoulder at me, and sometimes even growls.  I tell you what, to have your dog threaten you if you don’t spoon him…  it’s an experience!

Most of the time I accommodate,  but sometimes Willy smells, well, like a dog, and I really don’t want him under my nose.  In those instances, I roll over, my back to Willy, in the hopes he’ll just move over to his side of the bed.  Nope.  If I don’t spoon Willy, and Willy wants to spoon, he spoons me.  We’re talking flip over, move the back legs out of the way to get maximum contact, left arm draping over me, head on my neck.

Given the current sleeping circumstances, Willy necessarily gets more baths than any of the other dogs – every 2 weeks, at least.  For those who don’t know Willy, bathing is not on his list of acceptable activities.  Each bath is followed by either pouting,  anger directed at my person or other such behaviors intended to let me know just what a lousy person I am.

Usually Willy goes somewhere outside the house traffic lanes to mourn his treatment.  Today, however, he stayed pretty public.  And it wasn’t that he just stayed in view, he stayed in view, in his “I’m mad at you” posture, for quite a while.  It gave me several photo ops – 126 pictures over the course of 28 minutes, with 3 walk aways on my part,  before Willy realized I wasn’t going to apologize.  At that point, he gave up and went to sleep.

No worries readers, Willy never goes to bed mad at me.

As an aside…  Do you not find it at least a little justified that Willy’s take on our relationship is starting to creep me out?  I mean, I realize he’s a dog in physical form only, but the inside, including the brain, is a human male, but still…   it’s getting more than a little weird.

Adventures at Run A Muck Ranch

Tales From The Woof Pack

The Fictitious Adventures of Real Misfits

Tails Around the Ranch

Adventures of a pet therapy dog and his Ninja sister

Stories, lessons and experiences from the final year of veterinary school

The blog about everything dog

A Memorial Garden to help honor and rescue Golden Retrievers.

Geminis are a mix of the yin and the yang, they are represented perfectly by the Twins. The Gemini-born can easily see both sides of an issue, a wonderfully practical quality. Less practical is the fact that you're not sure which Twin will show up half the time. Geminis may not know who's showing up either, which can prompt others to consider them fickle and restless.

grab your Sisu Bead and continue the adventure

Changing minds about the bully breeds.

"Two roads diverged in a wood and I – I took the one less traveled by." – Robert Frost

Snap shots of an Aussie Dog living in Southern California

All about our truly best friend...

All things Cairn...Snapshots of my Cairn Terrier, Trev & Caring For Your Senior Dog

Saving the world for one dog at a time through fostering.